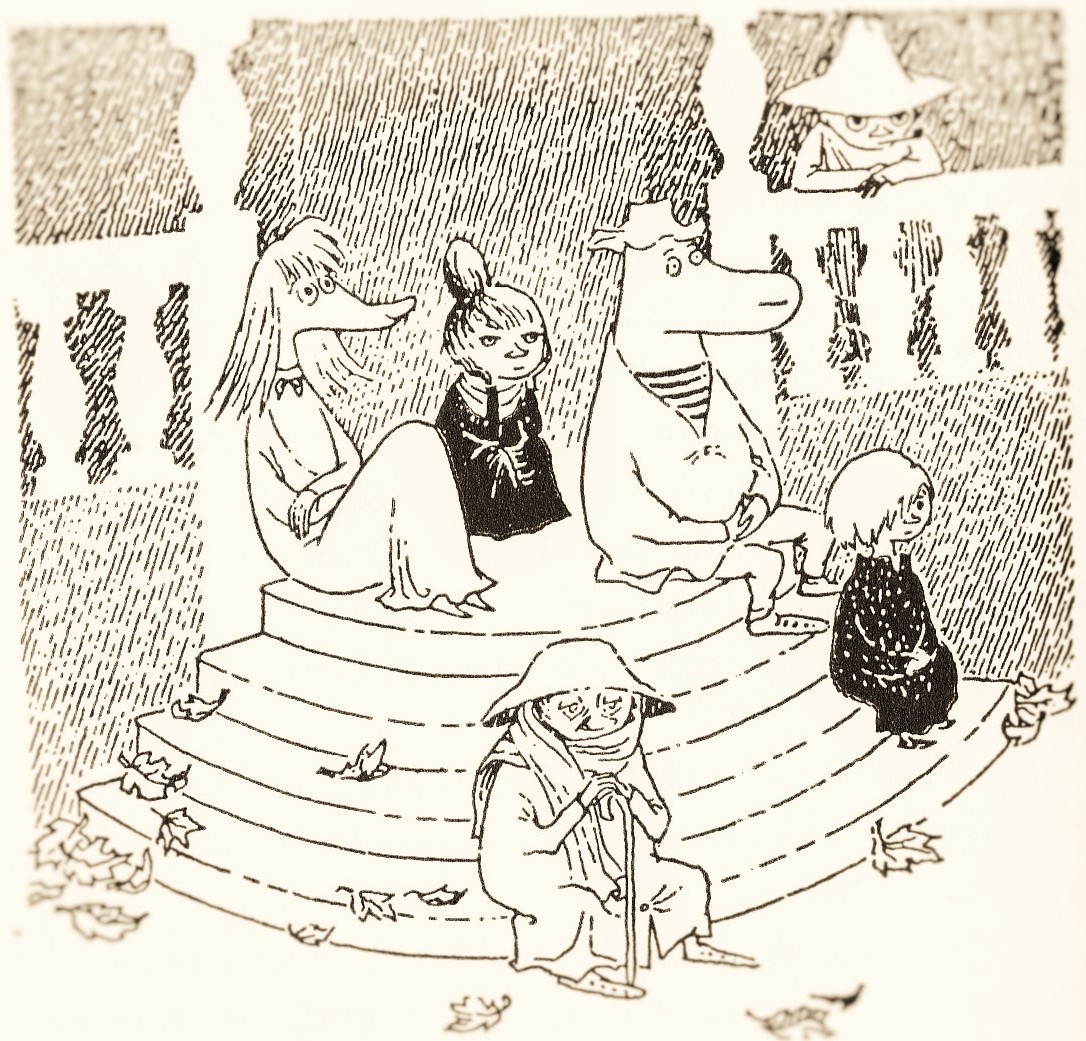 ”The Exodus of Ms. Fillyjonk”

The Exodus of Ms. Fillyjonk

“That’s not too bad,” said Ms. Fillyjonk to herself, wiping her nose as she watched the screen. Delete yesterday’s desolated draft. And the ones from before – delete all of them. Out of sight, out of mind. New document. “I am getting out of this,” she muttered, leaning in towards the screen. She had typed,

I have been afflicted by Violence. It is in me all the time. (6 days? 7?) The images are disturbing. It has become worse.

She pulled the cardigan tighter over her dry, thin hands. Observant mode. Determined mode: the alchemy of telling turns chaos into cosmos. And something was definitely stirring. Moving on, Ms. Fillyjonk looked up violence on Merriam Webster.

Violence is vehemence (intensity). Vehemence has had enough, and erupts.

“I hate vehemence,” she noted to herself, gossipingly. “It flashes up. Catches me off-guard.” Pausing for a moment, she added, “I hate things that flash up and catch me off-guard.”

Ms. Fillyjonk saved the document once more – just in case – and stood up, suddenly sick of it all – all of these ridiculous processes – and feeling awfully edgy. “I hate everything,” she thought to herself, bored. There was nothing in the fridge. Poured another glass. On the street, four storeys down, a father was trying to get a child into a stroller. Like wrestling a muddy bug, Ms. Fillyjonk noted, as calmly as coming around after anaesthetic. Several skylarks simultaneously took flight from nearby bushes. A biker narrowly escaped a sharp turn around the bend. The sky, she saw, was surprisingly blue behind the clouds. 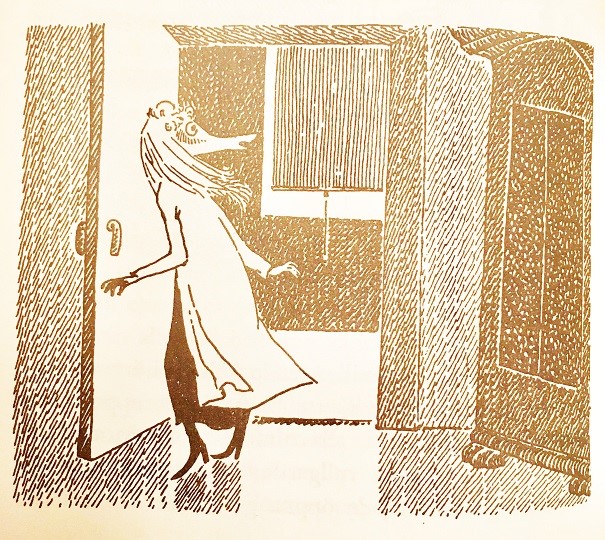 Ms. Fillyjonk in her rooms.[1]

“I’m going to word myself out,” whispered Ms. Fillyjonk, turning back to her chair in a bout of confidence. She wrote,

A wave of hopelessness hit her reactive whiskers; she looked away from the screen. The windows could do with wash. “No,” she said, with unfamiliar resolve. “As long as I stay away from Gaffsie, I know I can do it.” A sip of the wine – lovely Californian blend. “And people who look like they’re other people, but who are really Gaffsie anyway,” Ms. Fillyjonk mumbled. She sneered at today’s paper, folded on the table. Gave it a small push with the back of her hand. “You’re Gaffsie too,” she muttered to it, adjusting her computer glasses. 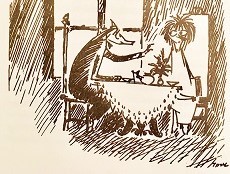 “Violence,” she repeated aloud, checking for resonance. The walls of her rooms responded at once. They were beige or grey – hard to tell at any time of year – and, clearly, very obliging. Large, clean, and stabbingly bright; like the sky on a certain type of particularly awful, clouded day. “Forget it,” she told them. “I didn’t mean it like that.” Ms. Fillyjonk wrote,

Violence is dissonance (clashing, jarring). Dissonance is searching for the right tones. The right notes. With other people or places, situations.

Ms. Fillyjonk nodded to herself in agreement. She was getting somewhere. Added,

Dissonance is a quest for melody.

“Albeit occasionally painful.” She chuckled lightly, rose to stand and immediately fell over as one foot of her chair collided with the rug’s edge. 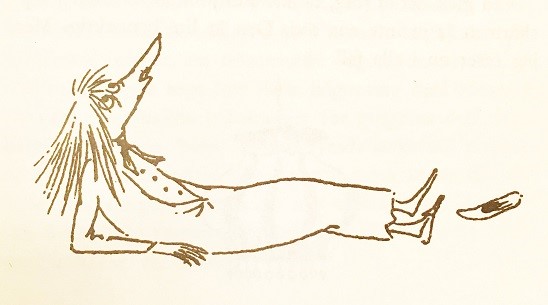 A spider was making its way towards the middle of the ceiling, casually rather than determinedly; as if enjoying the landscape. As if preparing for a picnic in the shade of the chandelier. Ms. Fillyjonk watched with detached interest from the floor. She imagined her ceiling covered in up-side down grasses and poppies gently swaying in a breeze. Tiny larks nesting in the chandelier oak… Slowly, she stood up again. “Why am I so difficult,” she thought, gently putting her hands on the wall next to her. She let it stroke her cheek in all its overwhelming beige or greyness. “I feel so locked. I’ve always been so locked up…”

Ms. Fillyjonk put her feet back into the slippers and sat herself down in front of the computer. The thought of changing font and letter size struck her briefly; she let it go. She wrote,

So you’re treated like a slave for a moment. The ego responds, because it was the ego that was approached. But the Queen rises above – quicker and quicker, the queen’s air can overtake the allotted space for Response.

(Blushed and heart racing but) you must wait. Then reply to slave-to-slave messages like a benevolent queen would have replied.

She straightened her back, feeling indeed a little like a benevolent queen might feel. She bent down again; she would need to raise her screen several inches to keep the posture sound and still be able to see what she was writing. “Master and slave,” thought Ms. Fillyjonk – her ears by her shoulders – “like Hegel said.” Shift + space, she added,

There are only two levels. (?) You choose slave: you have neither rights nor responsibilities. You live your life beaten, in avoidance. You choose mastery: you choose duty above all.

Duty smiles with the compassion of a benevolent queen.

“Duty is liberation to a world of purpose and virtue,” she mumbled, suddenly absent-minded; as if her lips had been too slow. Outside, a young woman blocked the street, staring at her phone. A driver honked at her; she moved away and sat down on the sidewalk. A tear rolled down Ms. Fillyjonk’s cheek as realized the woman must be very sad and lonely. “It’s all right …,” she sniffled, “it’s all right, little one.”

Gripped by an ache for input, Ms. Fillyjonk phoned Gaffsie. It was a little difficult to explain what was going on, but she tried her best. The woman outside, and the strange sense of caring for her even though there weren’t related; the desire for liberation to the wonderful world of virtue and meaning. And those interesting ideas she had had about violence and its possible meanings.

“Quite,” Gaffsie said in that voice that makes you stop talking. “That’s very interesting. Do tell me more later.” Gaffsie said she had to go. 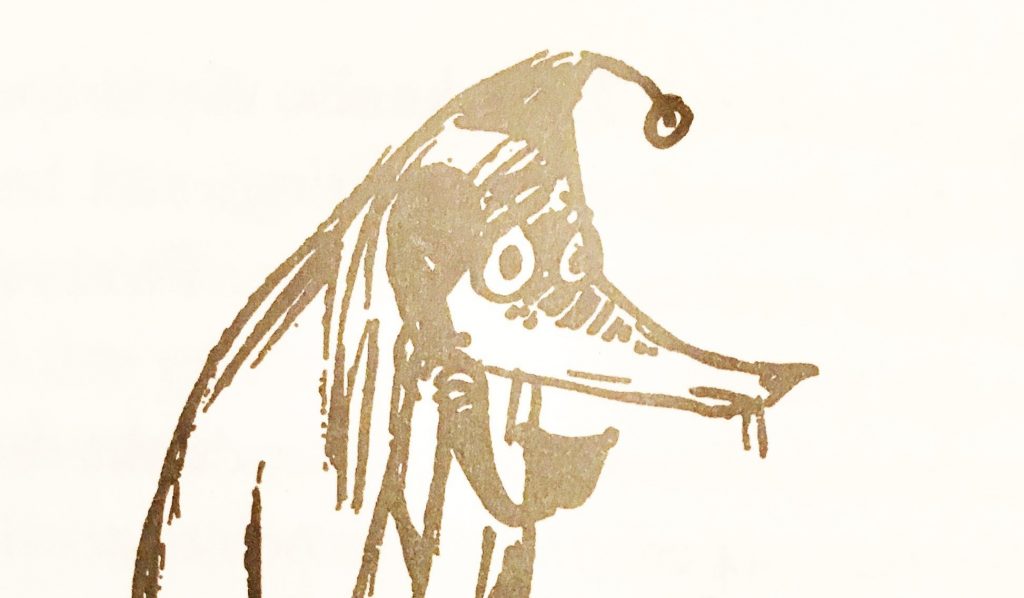 On the phone with Gaffsie.[4]

Ms. Fillyjonk paused in her tracks for a moment, but not much more than that. “It catches you off-guard,” she whispered to her walls. (Were they a subtle olive tint?) “But that’s how we must be: off-guard.” She sat down, eagerly, conclusively, writing,

Laying down your weapons is the best defence. We don’t do conflict in arms. We do dissonance, but that’s entirely different.

(You lose your grip now and then – this is a sign of sanity – a response to criticism, to being misunderstood, being treated below your level.)

“Queenness,” she thought, “is not really a choice. If you have a crown to bear, you need to bear it.” Ms. Fillyjonk got another napkin and stood up. Her spine creaked conversingly as she straightened it. She went to get the vintage House and Garden encyclopaedia in Russian, from her Russian period, and the Fundamentals of Nursing, from that one semester in Medical School. At the very top shelf in her wardrobe, she found an ebony runner that one aunt or other crocheted a long time ago. She lightly covered the thick books, as if making the table for a party of dolls, and managed to place her screen safely on top of it. She took a deep breath, and another. It sounded almost like waves breaking. A blissful yoga instructor she’d once encountered appeared in her head; she giggled a little, but without derision. 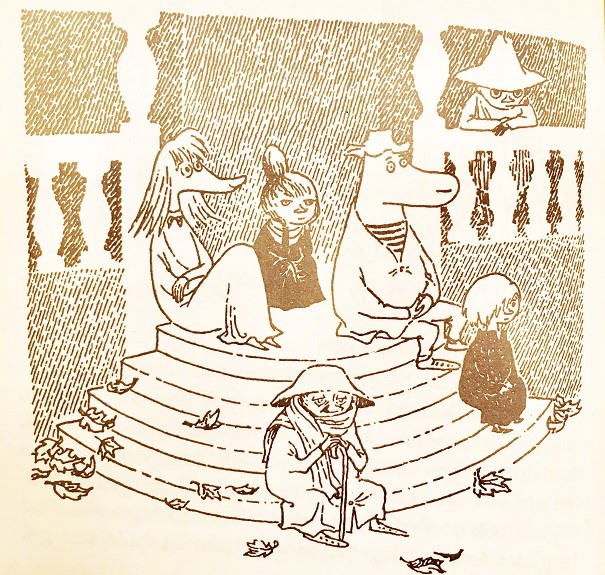 “There is something else, too,” she thought. “Something about kingdom. Foundation and beauty and wisdom…” Ms. Fillyjonk’s eyes blurred as a tremendous gratitude oozed through her body. Instinctively, she raised her glass. Then she wrote,

A crucial part of grasping and implementing majesty is Residency.

(Remember especially if you are new to the job.)

Ms. Fillyjonk blissfully reassured that all parts of the computer were secured and the runner not in danger. In an apartment opposite, a young man by a desk spun a pencil between his fingers. At the edge of the roof ridge, a seagull stared into the distance like a watchman on a ship. It took flight almost without warning, crossing the faint cotton candy trail of a distant airplane. Gaffsie came to mind; Ms. Fillyjonk imagined her in her living room disciplining a stray pillow. Quivering breaths. Confused, detached.
“To inhabit?” she asked her walls. “Yes,” she concluded interestedly; “habitat.” Looked it up on Merriam Webster.

“That’s not too bad,” said Ms. Fillyjonk to herself, wiping her nose as she watched the screen. She finished today’s important entry.

A queen has inserted her roots in the ground. (Or else they would clearly wither.)

A slave is in exile.

High above her soft, fragile hair, a spider began weaving a veil for the coronation. And although Ms. Fillyjonk looked away as it happened, one hundred ceiling poppies reverently bowed to her.