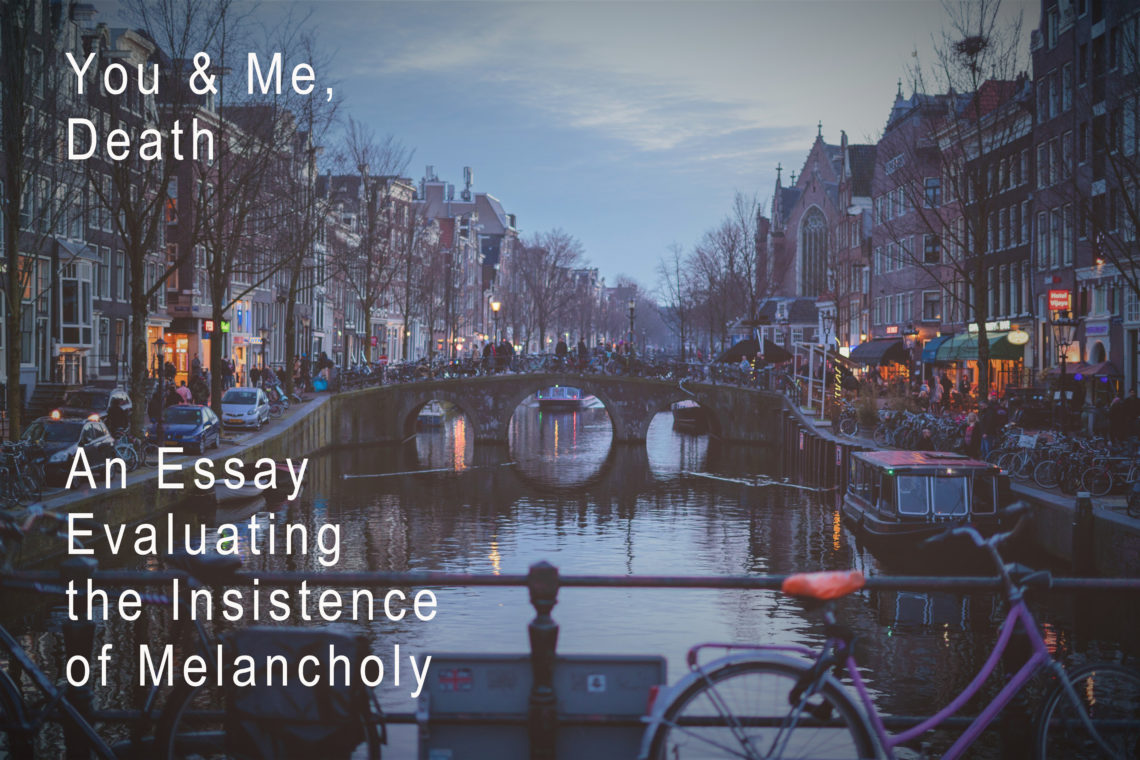 You and Me, Death. An Essay Evaluating the Insistence of Melancholy

The Amsterdam city police had an annual sale of unclaimed bikes. We international students gathered in the square to find a suitable vehicle and try it out. Some of us were rather instable, but certainly about to learn.

(In Amsterdam, you ride your bike between a car in motion and a practically non-existent fence next to a canal. It’s wonderful, thrilling, and I still talk about it.)

I got a simple, grey bike. I painted it dark green, and got myself a proper chain and lock that cost more than the bike itself. I rode through the streets of this marvellous city, lovingly locking it tight onto bridges and fences. I had the same bike the entire time I was there. My bike was not stolen.

It was the spring of 2005; early, cold. I had a student room on the Prinsengracht, just next to Anne Frank’s house and the Westerkerk. On the other side of the gracht was the Saturday market where I’d find little postcards from the early 1900s in a box of assorted curiosities – flicking through my drawers this morning, I found one of them. A technicolor boy and girl on a little pram, with hay and flowers, addressed to a Greta Paezens in Bussum. Stamped in 1923, I think, although it is a little difficult to tell.

She’s gone now, I expect. Greta Paezens. The sender, possibly Oom Cornelis, is gone too. They’re all gone. I have the card here in my hand and, looking at it closely, I have to remind myself to keep breathing.

In March 2005, Swedish pop band Kent released their album Du & Jag, Döden, whose name I gently copied for my Melancholy, Ennui, Despair and Fate course essay. In fact, I translated the entire album to English and enclosed it as an attachment.

Melancholy isn’t bad. Not at all. The School of Life has a very nice article about it on their website, in an article under the heading Self-Knowledge. For example.

Maybe you have a few words about it too. To write, or to tell.

Philosophy is what we need.

The Smiling Feminist: An inquiry into the possibilities for current ‘psychoanalytic feminism’