This text was originally published as part of a creative
writing project – a compilation of 32 entries by 30 contributors.
The complete ebook is available for purchace at the InterGifted Bookshop.
Published with permission.

Five weeks short of the baby’s due date, I came down with a version of the flu. Nothing major – slight raise in body temperature (putting me at about human average) and a sudden need for 1.5 hour naps. I called in sick, and stayed on the couch for the next four days. I worried a bit. It’s what I do: Intense imagination. Plus the need to consider all possibilities, and to be prepared. But the temperature lifted, and I was back at work the week after.

I took a photo of my big belly silhouette in the mirror. 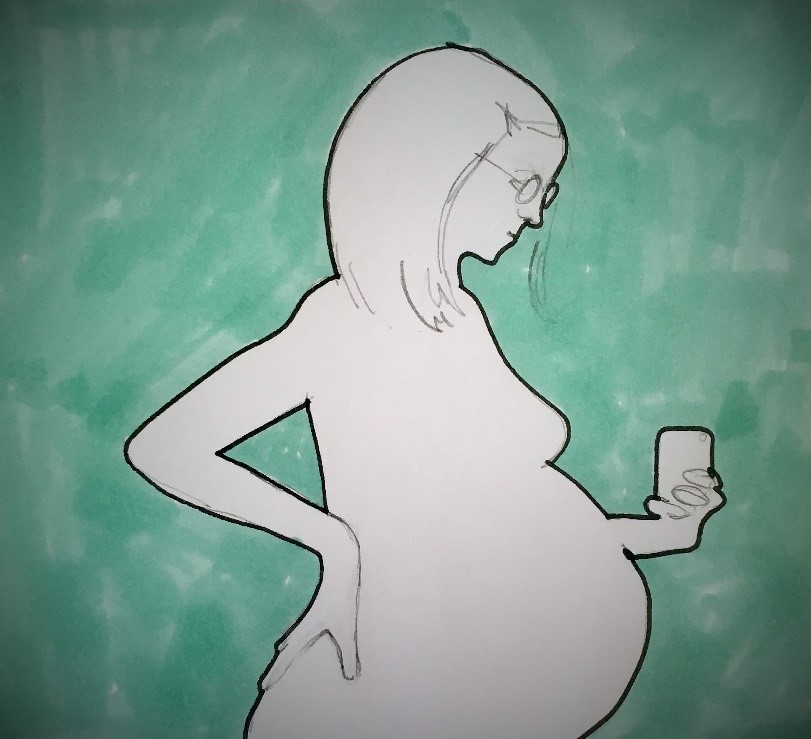 Then it started again. Much worse this time – proper fever in the conventional sense and I lost my voice completely. At first, my couch confinement warped into a strange meditation on awareness. I scribbled notes (in not entirely straight lines):

To be aware of one’s choices

If everything I did (I thought to myself) was amplified and then directed into my own life – what would I change? Alternatively, for the choices and voices etc. that I’d perhaps want to keep – what could I amplify them with?

In my mind, musings like these often sail towards ‘Love and Work;’ “the cornerstones of our humanness,” like Freud said. Or Ora et Labora, pray and work, maybe. I want to do projects. I love thinking ‘New Project.’ I’m doing a project now, for instance, with my friend and colleague Karin. (I love thinking, ‘Friend and Colleague.’ It implies joint efforts by choice; faces in the same direction.) We’re recording a three part podcast series on The Philosophy of Pregnancy, because I’m pregnant and a philosopher, and she is lovely. And when you google ‘philosophy of pregnancy,’ there’s really not a lot out there. In my ‘Always More’ life, intensity and drive conjure winds.

To be aware of thought patterns is more difficult for me. And the voices… Keeping track of who says what in my head. I read Martin Seligman’s book about learned helplessness, and realized that I quite often attribute success to external factors and failure to myself. I’d thought I was quite the optimist. Since then, I pay close attention.

I had a ghastly night. Dreadful. No sleep. I figured I’d sit and stare in the dark. Like that Morrissey or The Smiths song, “in a room downstairs she sat and stared.” My eyes were burning. At 3 am, I had very high fever and took a double dose paracetamol, pregnancy proofed, noting time and amount in my papers. I was now on Day Three of paracetamol every six hours. At 3:45 am, nothing had been relieved, and I started roving about the dark apartment, round and round, all my heavy weight on the soles of my feet. Flat, short steps like an arctic penguin negotiating its environment. All the things that I don’t see… (I mumbled to myself.) Now is a preparatory time. A time without conclusions. I need this first, so I can get to the expansive state later. In my ‘Both – And’ life, there’s a time to halt too, apparently. A time for no movement. For fasting? Maybe fever is the fasting of that drive of mine. Maybe it is.

I tried to breathe very steadily, in and out, so as not to disturb the horridness in my throat. Coughing with a belly this size is not pleasant. Poor belly muscles. Holding to stabilize with my hands doesn’t do much difference.

Lying feverish on the couch that night, I compulsively repeated a sentence starting with the Romani name ‘Soraya,’ over and over. I don’t know what that was about.

What is important? Dignity? Yes, dignity. Carrying one’s natural majesty. Get up, stand up – or the mantel will get soiled! If I need to collapse, I’d like to collapse gracefully. On a divan. But I’m so snotty. I have no voice. Oh gosh. Soraya, Soraya…

The longer this fever goes on, the less I worry about it. Day One I kept thinking that the baby might die. I thought that I must vigilantly observe any changes in fetal movements. Day Four of maximum paracetamol (I, who otherwise go to such lengths to avoid pills) makes it clear that this part of the process is not for me to script or direct. I do feel a bit restless when I can’t work. I can’t create, that’s obvious. And I have no voice, so I can’t even call and check that thing with the tax authorities.

I tell myself that my work is to sleep. I tell myself like a loving, wise grandma could have put it, with a soft, unconditional voice. Unconscious, I exhort, do your thing.

Today is the day that my daddy died. Fifteen years ago today. His name was Antonius.

I look at my hands. My left hand, watery thick and pregnant. Nails cut short, like when I was 11-12 and we went to pick up the puppy. I remember the photos of my hands around a little one with a pink belly… And I had my hair permed. It was 1991.

I almost always have some more or less self-inflicted wound on some fingertip. 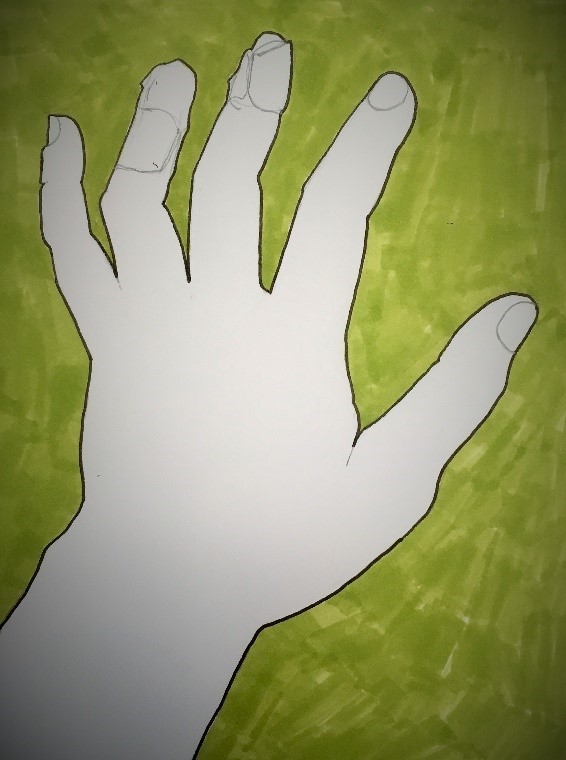 I sleep all day. I’m hibernating. Incubating. I move slowly between couch and bathroom, couch and kitchen. In the window next to me: A bust of Einstein and a blue rabbit lamp I found on sale a couple of weeks ago. For the baby, when it comes. “Follow the blue rabbit” means sit back, relax and enjoy the fever ride. 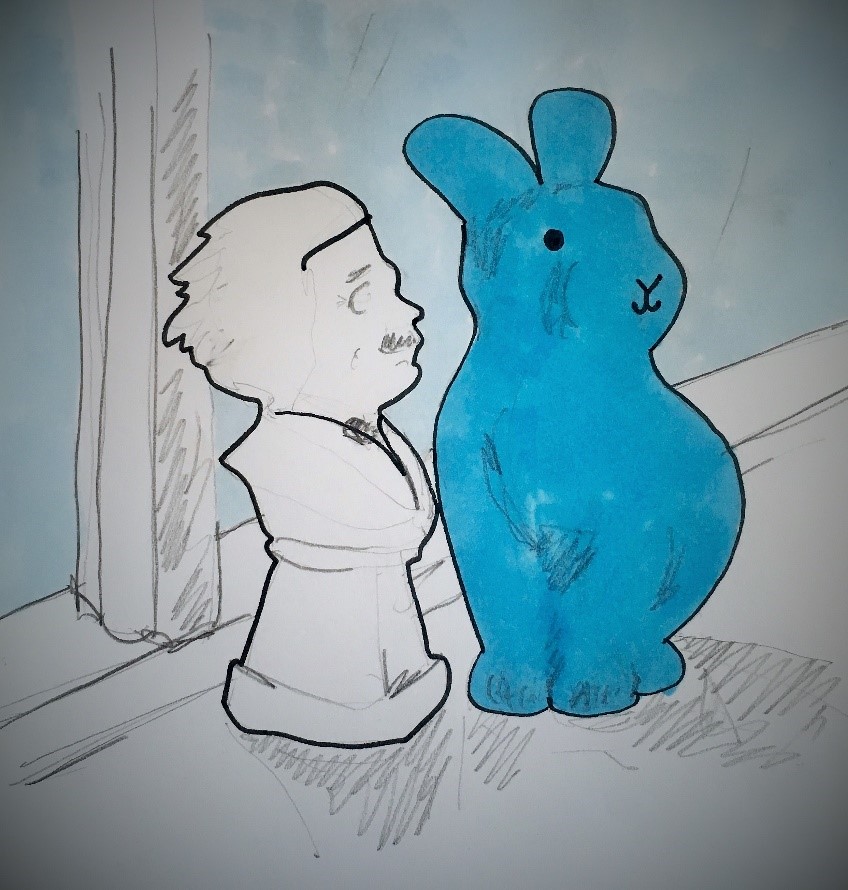 Had a thought: I got sick because I’m worried. Thought the thought all the way:

(I already have a child! Now I demand another one? Do I think I can just go on as I please? Like an un-curbed, chaotic cancer?)

I know I always say that this pregnancy is a task, an honor to have been given.
A cover up story! Smoke screen thoughts of the conscious mind.

The fever lifted, practically then and there. Thank God for words. In my ‘Everything, Everything’ life, some things are bound to work well.

The next day, I went to town for a bit. Got some white acrylic for my wonderfully cheesy waterfall painting. (It looks like the water ends in a pool of tar – it’s too black.) Picked up the Oliver Sacks book I ordered from the University Library. Considered going by the fabric store to check whether they have anything like the Mediterranean green velvety stuff I’ve started to see for a bedspread – at economical pricing, of course – but decided to do it later. Decided I won’t start sewing that round floral old lady handbag I’ve been imagining either.

It’s nice to decide to do things later. A surprising sense of relief, I hear myself reflect as I’m writing this. (What does that say about me? The thought makes me giggle.)

I thought I’d be writing about the deep and profoundly meaningful topic of clothes, appearances and public persona. How to authentically express all one’s otherness… so that one can liberate the otherness in others. See, what I want to exude is this: I am not afraid of the dark. Not yours; not mine. You can be like this. I am, and the earth still turns. When I talk to a coaching client or hold a public lecture, that’s what I want my in-the-world-ness to feel like. And I thought I might also want to write something about the pleasures of courage… Designing and sewing a dress, and then actually wearing it in the presence of other people.

Just thinking about colors and courage now makes me a little happy. A skirt to go with the new blazer I found on sale. A project. Wind in my sails. And the waves are mine to ride – they do not threaten me; they do not hurt me. To be on the way. Oh, to be On The Way.

That evening, I got a strange feeling in my belly – like it was all spiraling downward. Quite painful, in fact. After a while, I noticed that it happened regularly at six minute intervals and ever more intensely. We drove to the delivery ward. She’s coming! I shouted through the laughing gas (which, by the way, does not make you laugh) at the nurse who seemed to think we had hours to go, Help! And she came, just like that. In a rush to get here. My baby daughter.

The birthing process is initiated by the baby itself, I read somewhere. I find that idea immensely meaningful. To trust the process… It may have been launched at the beginning of time.

Remember that Einstein quote that ends with “God doesn’t play dice?” Allegedly (but here the Internet gives multiple story versions), Einstein began by saying something like, “The first and most basic question we all need to ask ourselves is, ‘Is the Universe a friendly place’?”

I know my answer. 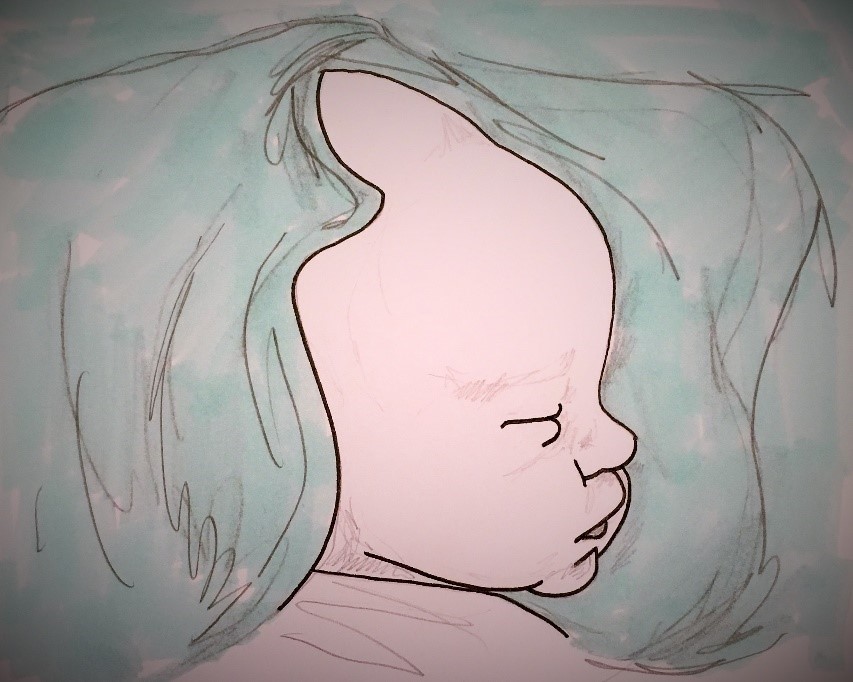 Miriam van der Valk has studied philosophy at the University of Auckland, New Zealand, and the University of Amsterdam, the Netherlands, as well as with APPA in New York. Based in Gothenburg, Sweden, she hosts public events, moderates panel talks, organizes courses and workshops, records podcasts, writes, lectures and coaches through her philosophical practice, Filoprax.